It has been another very interesting month in the world of responsible sourcing - the interest in corporate sustainability commitments has continued to be in the news this month. We have taken a deep dive into some of these stories.

A series of damning reports has cast palm oil producers in Southeast Asia in bad light over the last month, including reports from Chain Reaction Research, the University of Queensland, IUCN and Greenpeace. You may have also seen that RSPO temporarily suspended Nestle for its failure to correctly submit progress reports for 2 years in a row.

Sustainability of soy has also been in the news, with a new report from Trase on transparency data, and a major statement from the Louis Dreyfus Company confirming its commitment to responsible sourcing. The largest UK retailer, Tesco, has similarly pledged to move towards sourcing only from areas that have been certified as deforestation-free by 2025.

Also this month, Myanmar lifted the ban on the export of raw round logs for private plantations and concerning reports from Earthsight about European Union’s biggest timber firms colluding in the destruction of Ukraine’s virgin forests. 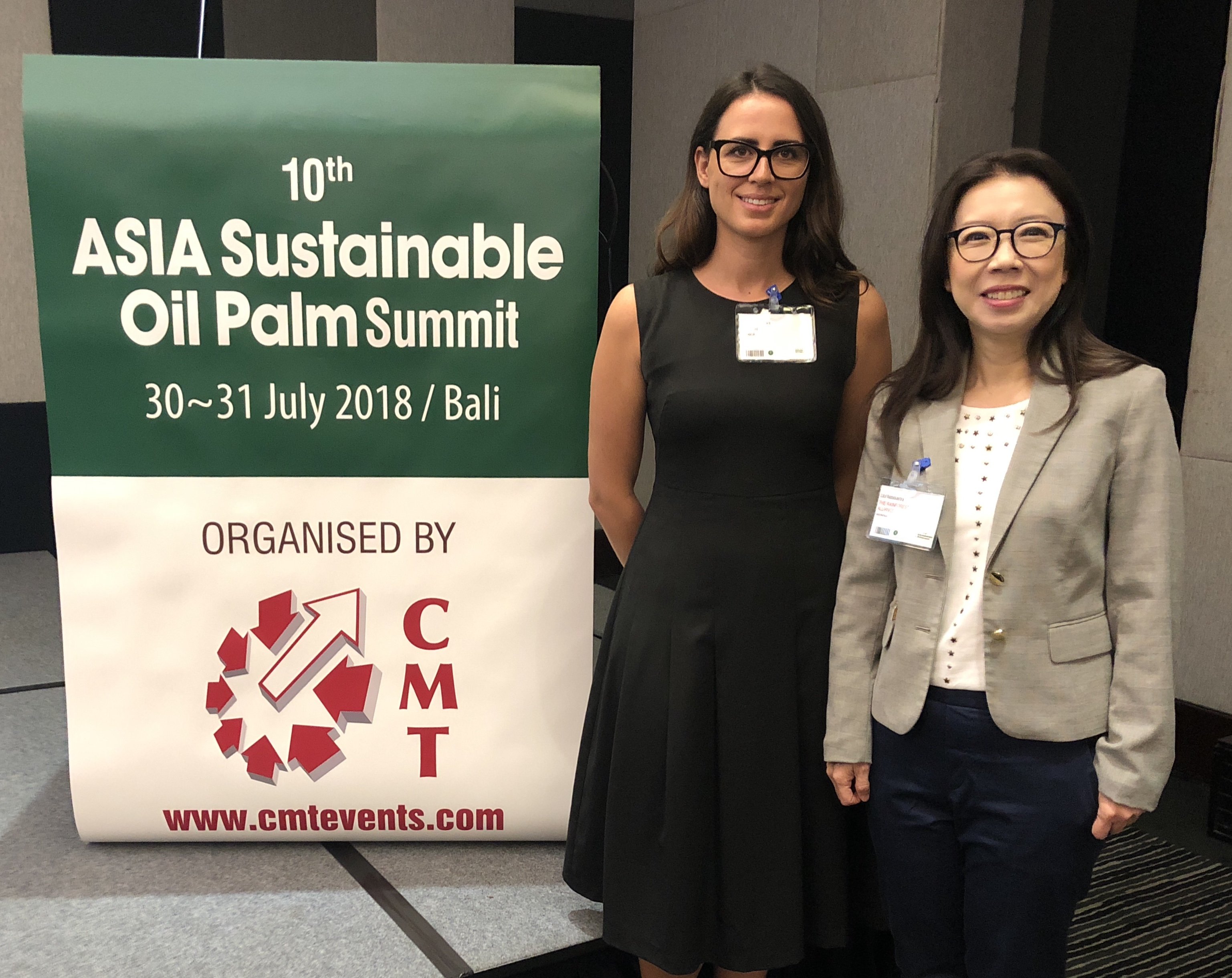 At the end of July, I attended the 10th Annual Sustainable Palm Oil Summit in Bali, Indonesia with a colleague from Rainforest Alliance. The summit focused on smallholders, the European bio diesel ban and replanting technology and innovation. It was a great opportunity to participate in a lively discussion around the current challenges facing the palm sector in Asia, and to hear about interesting developments in the sector.

As always, we have endeavored to bring you a curated summary of the most relevant information for your sourcing and due diligence this month.

This newsletter aims to summarize all the important responsible sourcing stories for you from the past month, analyse some of the big stories that are affecting the forest impact commodity space and update you on any new developments on the NEPCon Sourcing Hub.

Please share this newsletter with your networks, and of course let us know if you would prefer not to receive this newsletter in the future. If you think there is something missing from this newsletter, especially news from the past month which should be featured on the Sourcing Hub, please get in touch.

We have the following videos:

You can find all the videos on the Sourcing Hub.

A series of damning reports has cast palm oil producers in Southeast Asia in bad light over the last month. First, a report released by a risk analysis group Chain Reaction Research depicts how large conglomerates in palm oil business that formally subscribe to No Deforestation, No Peat, No Exploitation (NDPE) sourcing policies build opaque ownership structures of “shadow companies” to conceal links to rainforest clearance and peatland destruction. The report mentions Sawit Sumbermas Sarana, Gama, Bintang Harapan Desa, and the Fangiono, Tee, and Salim business groups as being complicit in these activities.

In a separate related report by Greenpeace, Wilmar International, the world’s largest palm oil trader, has been linked to large-scale deforestation in West Papua. Wilmar has reportedly been buying palm oil from Gama, a business set up by Wilmar’s co-founder Martua Sitorus and run by their senior executives, despite being aware the company was violating Wilmar’s NDPE policy by clearing rainforest. In response to the allegations, Wilmar announced it had stopped sourcing all palm oil from suppliers connected to Gama. Moreover, Mr. Sitorus and another senior executive with links to Gama have resigned. The accusations have also prompted an investigation by the RSPO into its member’s organizational structure which might be in breach of the certification scheme’s membership rules.

Another prominent member of the RSPO, Nestle, was temporarily suspended for its failure to correctly submit progress reports for 2 years in a row. RSPO later reinstated Nestle as its member after they submitted a time-bound action plan to source 100 percent RSPO certified sustainable palm oil by 2023.

These stories came out at the same time as a study by researchers at the University of Queensland concluded that RSPO certified oil palm plantations showed no significant difference in environmental, social and economic sustainability compared to non-certified estates. This is despite the fact the RSPO has the strongest set of criteria among the edible oil  certification schemes.

The importance and relevance of palm oil certification schemes remain high, however. Ananalysis by the IUCN showed oil palms to be the most productive vegetable oil crop per unit of area - they provide one third of the world’s vegetable oil, from 10% of the land used for all oil crops. This means switching to other crops like corn or rapeseed could result in up to nine times as much land being needed in other biodiversity hotspots like Brazil or Argentina. IUCN thus called on certification schemes to improve their efforts and strengthen their standards to ensure palm oil production does not lead to deforestation.

Trase has released a report based on unique transparency data which provides a first systematic assessment of the sourcing patterns of major buying companies and countries and the deforestation risk associated with the major companies. The report has shown that the vast majority of soy expansion in the last 10 years has taken place in the Cerrado biome, while only less than half of soy exported from the region in 2016 was covered by zero-deforestation commitment.

The Louis Dreyfus Company confirmed its commitment to responsible sourcing when it recently announced its plan to completely eliminate soy associated with deforestation risk in the Amazon rainforest as well as in the Cerrado biome from its supply chain. The largest UK retailer, Tesco, has similarly pledged to move towards sourcing only from areas that have been certified as deforestation-free by 2025. Before that, by 2020, it promises to start sourcing ‘mass balance’ certified soy.  This is a welcome development on the EU market, since its soy imports are still associated with over 20,000 ha of deforestation risk soy, as shown by Trase yearbook.

According to data released in a new report from the monitoring group Global Forest Watch, 2017 was the second worst year in terms of tropical forest deforestation, right after 2016. In total, the tropics experienced 15.8 million hectares of tree cover loss in 2017, an area the size of Bangladesh. Brazil, Democratic Republic of Congo and Indonesia remain the deforestation hotspots, even though Indonesia has seen a dramatic drop in primary forest loss, probably due to its peat drainage moratorium. The main drivers in the countries are forest fires set up in order to make way for agriculture and pasture.

The annual ‘State of the World’s Forests’ report released by FAO confirmed the loss of tropical forests in tropical South America and sub-Saharan Africa, but highlighted progress made elsewhere which resulted in the pace of global forest loss slowing down considerably. According to the report, area covered by forest shrank at global level from 31.6 percent of total land in 1990 to 30.6 percent in 2015, but quantitative evidence shows that forests are being managed more sustainably, although the progress was not distributed geographically evenly, with most recent improvements being in Eastern and Southeast Asian countries. The report notes the inexorable link between sustainable agriculture and forest conservation and notes that increasing agricultural production to maintain global food security without increasing the area of forest loss remains the greatest challenge ahead.

A ban on the export of raw round logs has been lifted for private plantations in Myanmar after being in force for 4 years. This concerns approximately 300,000 hectares of active private plantations growing teak and other hardwood species which were allowed to form in 2006 under long-term land leases from the State but banned from exporting their unprocessed round logs in a bid to stop destruction of native forests and improve domestic timber sector competitiveness. Plantations interested in exporting their timber will now need to apply for an official permission from the Department of Forestry.

The European Union’s biggest timber firms are colluding in the destruction of Ukraine’s virgin forests, allegedly by making corrupt payments to local officials and by exporting illegally felled timber in spite of a moratorium on log exports, a new report by Earthsight claims. This timber is allegedly first illegally harvested under the pretext of ‘sanitary felling’ to help stop the spread of supposed bark-beetle infestation and then imported into the EU as fuelwood, circumventing thus the export ban on round logs. This scheme was in place thanks to widespread corruption in the state forestry sector fuelled by money provided by European timber processors like Holzindustrie Scheigerhofer, which had paid 13 million euros for ‘marketing services’ to the former head of the national forestry department Viktor Sivets through letterbox companies based in the UK.

Many companies mentioned in the report used FSC certification as a stand-in for their own due diligence to comply with the EU Timber Regulations, ‘failing [thus] to fulfill the spirit of what that law is supposed to achieve’ says Earthsight’s director Sam Lawson. Undercover investigation revealed that companies like Swiss-Kronos or Hungary’s largest timber firm Erdert were willing to buy illegal timber when approached by a fake trade agent.