The project completed a three-day workshop in Libreville where attendees from a wide range of Chinese forest management companies operating in Gabon attended. In addition, the Gabonese legality grid was revised to comply with the EUTR and other similar regulations. For this, local experts gave their input to the legality grid during an open consultation meeting in Libreville in November 2015.

Gabon is a country housing an array of tropical wildlife and beautiful scenery. Forest covers around 80 percent of the inland and it holds the second largest consecutive forest area in the world. However, illegal logging is a major driver of deforestation in the region. It is difficult to calculate the range of the illegal logging, but some sources state that a yearly amount of about 10 million USD is lost in Gabon due to illegal logging.

In addition to the provided training and knowledge to the Chinese companies operating in Gabon, in legality and FSC certification requirements, this project aimed at conducting pre-assessments of ten companies to help identify potential gaps concerning legality within the timber production.

WWF Gabon also supported the project by helping with logistics and establishing contact to the companies in Gabon.

The purpose of the audits was to give the Chinese companies the opportunity to reach a clear perception of the gaps between their current operation and the requirement of the EUTR or of FSC. After the audits, the companies were provided with a confidential report demonstrating the gaps. The confidential report enabled the Chinese companies to work towards a legality or FSC certification, and in this way the pre-assessments gave the companies a head start in the preparation for a legality or a FSC audit. FSC or legality certification is an asset to the companies when urging to enter large markets such as the European or US timber market where respectively the EUTR and the Lacey Act sets requires that the timber is produced legally.

The project had an overall objective to improve the forest management practices of Chinese companies operating in Gabon. Two specific objectives were formulated to help support the overall purpose of the project: 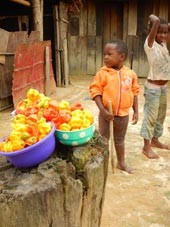 After this, the stakeholders training was initiated. WWF Gabon identified relevant stakeholders and these were invited to participate in a workshop, where they received training in the audit process and the system requirements in certification systems.

The third and last phase of the project was the gap analysis and implementation of 10 pre-assessments of the Chinese companies operating in Gabon. Preferred by Nature and Rainforest Alliance conducted onsite pre-assessments of the individual companies, and issued two reports per company containing a gap analysis, demonstrating the company’s compliance with respectively legality and FSC requirements.

All this information was gathered in a report, that summarised the findings and identified gaps, without disclosing the individual companies that have undergone the pre-assessments.

To summarise, the results of this project are:

Feel free to contact us if you wish to engage or learn more about this project: